Written by George and Rachel Barker on May 12, 2018. Posted in George's Happiness Blog.

“Winning isn’t Everything. It’s the Only Thing!”

“There is No Such Thing as a Moral Victory!”

What a time of year for the sports enthusiast! The 2018 baseball season is catching full stride, there are playoffs in hockey and basketball, the NFL draft, the professional golf tour is in full swing, no pun intended (okay maybe it is :-). And, for the non-professional enthusiast out there, you’ve got college and high school softball, baseball, and track that are wide open, and youth baseball and softball diamonds are full … and lest I forget, summertime swimming leagues.

Today, so much of our lives are built around the sports world. There is absolutely something for everyone, as the above-mentioned list didn’t even mention tennis, soccer, bicycling, cricket … well, I think you get the point. Now I know that even with all the options available, there are many of you out there who are still not impressed. Just never got into the sports “thing.” That’s fine, I have found my own interest has waned quite considerably over the last several years; however, there is no escaping the impact that sports and athletics have on our society.

I admit it, I’m a sports junkie

Before I continue, I must admit that I have always been somewhat of a sports junkie. Much more so as a kid than I am now. Beyond the actual competition, which I love, there are so many life lessons contained within the sports world. But, sometimes I do wonder, if somehow, we have allowed the sports mentality to enter into the other parts of our lives, and vice versa? Do we turn other aspects of our lives into a competition? The win-at-all-cost attitude, after all, for some people, it is the “only”thing. Maybe we treat our sports with too much emphasis, taking it too seriously? Instead of treating it as recreation, which it is? (Excluding, of course, that small percentage of those for whom sports is a living).

Two cases, to illustrate the point

Here are two cases to illustrate the point I’m making: One from the cinema; the other from television. (This is sort of ironic for me because I watch very little of either tv or movies.) The first comes from the movie Tin Cup starring Kevin Costner. Costner is a professional golfer with a chance to make it onto the big tour. To do so, he must win the tournament he is currently playing. He is playing the last hole, and all he has to do is hit a safe shot short of a lake, then a nice short shot over the lake onto the green, make a two putt and he wins. Okay, to the layman maybe not so simple; however, he’s a professional and he tells his caddie, “I can reach the green from where I am, I don’t need to lay up,” (a golf term for this particular type of shot). His caddie begs him to lay up and roll to victory. But, Costner can’t do it. He knows he can make this shot – in his mind –  he has to make this shot. He goes for it, and naturally, it finds the lake.

His caddie says, “that’s okay you still got this, just play it as we talked about before.” I might also mention that as this is unfolding the sportscasters and analysts are berating his actions. They agree with the caddie. The crowd is also mumbling the same, “play it safe, and win.” The crowd had been pulling for him because he was such an underdog. He looks at his caddie and says, “I can make this shot.” He drops another ball down (the penalty for hitting the ball into the water hazard) and yes, hits it into the lake. He continues to hit several more balls into the lake and has totally eliminated himself from competition. Alas, he drops a ball and hits it like he should have done the first time and it rolls up on the green to within a few feet of the hole. The crowd roars, the media people rejoice as everyone watching has now been emotionally drawn into his struggles. It’s as though everyone can all of a sudden relate to the struggling golfer. They have all realized that maybe there was something going on here larger than the game of golf. At first, they think he is merely having an ego trip, trying to do something against the odds. When in actuality, all he was really trying to do was prove to himself that he could actually do something he believed he could do. Is winning always about out-doing a competitor or is winning about internal victories?

Is It Worth It?

The second illustration comes from the sitcom, Everyone loves Raymond. Raymond’s daughter is in the Girl Scouts, and 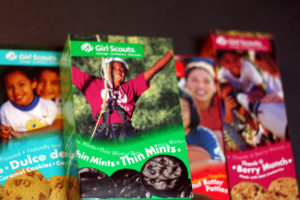 it is Girl Scout cookie time. Raymond vows that this year his daughter is going to be the number one seller of cookies. In the past, another girl has taken this honor as her mother makes sure her daughter gets the prime location at the grocery store and wherever else Raymond and his daughter might go to sell cookies. On this occasion, Raymond and his daughter get to “the spot” early and claim it. The other woman and her daughter arrive and make claim to the spot. It ends with a big fight between the two adults – all to see which girl can come out victorious in the Girl Scout cookie sale. Yes, I understand that nowadays they can get some pretty nice prizes for selling ‘X’ number of cookies, and yes, I realize that this was just a show, but I think we can all agree we see similar things played out in life every day.

This is what I refer to as bringing the competitive sports world into other aspects of our lives. Isn’t the point of selling cookies to raise money for the Girl Scouts and its mission? Aren’t both parents supposed to be working towards the same goal? Shouldn’t they be wanting to help each other and help their daughters succeed? Look around in your life, work, church, school, social circles, and volunteer organizations; I think you will find plenty of examples.

“Winning isn’t Everything. It’s the Only Thing.”

Yes, as long as you are the one who defines winning. To Costner, winning was internal. It was more important to him to be able to make that shot then to win the tournament. When we define winning as overcoming those internal battles, it is okay to extend it beyond the athletic field. When winning is about out-doing a competitor, it is best left on the athletic field.

“There is no such thing as a moral victory.”

Maybe true on the athletic field, but I hope you won’t allow athletics to carry over to the rest of your life. For a happy life, winning (overcoming the internal battles) is a moral victory!

Related: The Story behind the infamous ‘Tin Cup’ scene