Homonyms – Liken or Lichen. Say what?

Written by George and Rachel Barker on April 21, 2019. Posted in George's Happiness Blog.

What’s this have to do with living a happier life?

Southern dialogue is well known for running words and phrases together as to shorten ‘em. It was long said that this was because us’ens here in the south are lazy. Well y’all, I’m just here to tell you that I don’t think it’s laziness. I like to think we’re just efficient.

Another example is “liken.” It is used in place of “like something or a comparison. Example: I “liken” his temper to that of a rattlesnake, or I “liken” her to a rose, beautiful from a distance but if you get too close you might get an ouch!

There is also a living organism called a lichen. That’s what’s called a homonym – when two words sound alike but have different meanings. Yes, yes, I know “liken” isn’t a real word according to Webster and the likes, but it would certainly be found in any southern dictionary.

What’s that on the tree?

Back to lichens. Rachel just recently found a very interesting article on lichens.  https://awaytogarden.com/what-lichens-are-telling-us-with-dr-james-lendemer/ Other than a few questions from people asking me, “what’s that growing on that tree?” I haven’t thought much about lichens since biology class many moons ago. Upon reading this article, I realized that there is a lot about lichens I have forgotten or probably never learned. 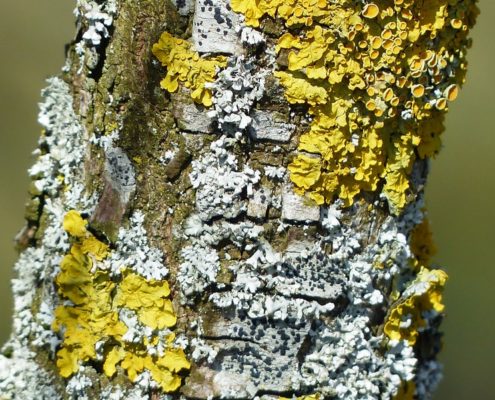 For example, lichens are actually a combination of fungi and algae. They live symbiotically, meaning they help each other out. The fungi protect the algae and the algae feed the fungi. Then there’s this other critter that’s often involved called a “water baby.” A water baby is a small invertebrate, meaning it has no backbone (and, we’ll just leave that for the time being lol).

What does this have to do with happiness?

Okay, okay, I know, enough of the science lesson. What does this have to do with being happy? Well, think about it. There is this whole little system going on in this seemingly simple lichen. We see them growing on rocks, trees, soil and almost anywhere. Looking at a lichen, who would ever think that this complex ecosystem exists in this seemingly simple looking thing growing on a rock? To some, it doesn’t even look alive.

Here are two takeaways from lichens to live a happier life:

I liken, lichen to the way we aught live!

Lichen up, and find and fulfill your purpose – life is short!

Go forth and see if you can find a lichen operating near you! And enjoy the outdoors, it’s spring!
If you find some really good lichen, send us a pic!