Written by George and Rachel Barker on June 8, 2018. Posted in George's Happiness Blog.

Tweet. Ah, the sweet sounds of the song bird as the sun rises or their signal at dusk of another day’s end. Is there anything as simple or pleasurable as listening to the song of a bird? 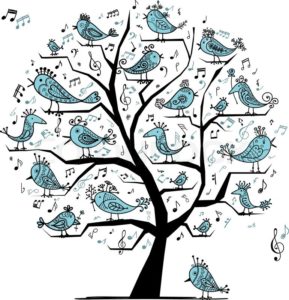 In years past, life was much simpler, in spite of the lack of today’s modern conveniences and technology. Yes, I understand that part of that nostalgia is a function of age, namely mine; however, even if you are proficient at Insta-this, Face-that, Pinning and tweet, tweet, tweet you have to admit that there is a lot going on within the social media world. Much of this information isn’t even pertinent to our lives; It certainly doesn’t appear to make life any easier. It seems it’s just information out there that absorbs much of our cerebral space, and much of it puts us into comparison/competition mode (see Keys to Happiness: Winning). It can be exhausting just thinking about it.

Again, I ask, is there anything as simple or pleasurable as listening to the song of a bird? Maybe. Read on! 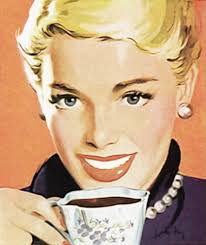 Recently, I was early for an appointment and had a few minutes to spare, so I decided to pop into a local coffee shop, sit down and enjoy a good cup of joe, which I normally would get to go. The shop was quite full, but I was able to find a seat. I had left my phone in the truck and decided not to go back and fetch it. After all, the world could go on without me for 30 minutes. Besides, I always enjoy people-watching and a full coffee shop offered just the place – almost as good as an airport! A good cup of joe and the occasion to observe my fellow human beings. Life was good! Little did I know, I was in for a big disappointment.

As I looked around, trying to be somewhat discreet (nothing worse than getting busted when someone starts watching back), I was amazed to see 99% of the patrons were staring at a device of some sort: a phone, pad, laptop, and one device I seriously couldn’t figure out what it was.

The one percent was me. Now, I am not naturally a very conversational person, but in a situation like this, I will usually try to strike up a conversation with someone as long as the person appears to be somewhat approachable. Nope, not today, not in this coffee shop. Not only did no one look approachable, I could hardly even see a face, as they were so buried in their devices. Even people who appeared to be there together, weren’t talking to each other. Of course, this lack of activity made for some boring people-watching; however, I became so fascinated with it, and curious how long it would last, that I ended up being late for my appointment! I will say that this phenomenon lasted the entire time I was there with not one. word. spoken. There were even two people sitting at the same table who got up and left without saying a word to one another. It was as though there was some type of mental telepathy between them signaling “time to leave.” Of course, all of this lack of conversation got me thinking (I can hear Jane sighing now!).

Is there anything as simple or pleasurable as listening to the song of a bird? 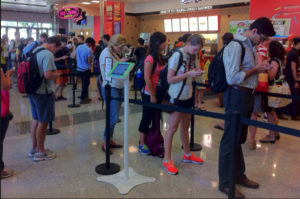 Because of our devices, we are now able to carry our own little world around with us everywhere we go. In so doing, how many other worlds are we missing out on? I thought beyond this coffee shop and all the other places and opportunities where we no longer engage with other human beings. Below are a few, from recent memory:

Is there anything as simple or pleasurable as the song of a bird? Yes!

Conversations with total strangers, for one. Think about it. Going in, you know that you are going to walk away from that conversation and likely never see that person again. No biases or prejudices going in or coming out; No strings attached, no agenda, no need to impress and no need to be impressed. Just a simple conversation with another human being about anything or maybe even about nothing. A brief divergence out of your own world and into someone else’s.

Has the erosion of the art of conversation made us less tolerant of others? 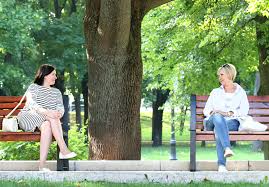 I like to think of these encounters as meaningless conversations. I like to refer to them as meaningless because they are harmless, but by no means are they meaningless. In fact, as I have already eluded, these conversations have great meaning: What they do is allow us to enter into someone else’s world, someone else’s space. We do this without trying to convert them to some other way of thinking or try to understand a point of view. That’s not what these conversations are about. And, in any event, most of the time if they say something you disagree with, just smile and nod (Yes, I understand that there are people out there who will argue with a brick wall if given a chance). But, why argue? While standing in line or waiting for your plane? What is the point? Just listen and talk; It’s about as simple as it gets.

These conversations – with no judgment or preconceived notions – will bring more meaning and satisfaction into our lives than many of us realize. Wow, could we use some more of that in the world.

I love having my phone and having access to friends and family at anytime. I also love setting it aside at times and engaging a stranger in some meaningless conversation. I hope you will do the same. With so many complexities in life, try enjoying some of the simple and pleasurable ones, and see how much happier your life becomes.

Who knows, maybe one day you and I will bump into each other and engage in a meaningless conversation! Cheers!