Is It Really Thanksgiving Already?

Written by George and Rachel Barker on November 27, 2019. Posted in George's Happiness Blog.

Yes, that’s right … Thanksgiving is here. It seems that this year I’ve heard more than the normal amount of people shocked that it is already upon us, and this year, it is actually late. I can’t help but to think how Thanksgiving has changed here in the 21st century. If for no other reason, I can point to how Black Friday now begins on Thursday (yet we still call it Black Friday- I digress). No, I’m not going to go on about commercialism, there are enough others who focus on that. Instead I thought I would share my Thanksgiving perception.

More than just a day.

To me Thanksgiving has always been, at least in my adult years, been more than just a day. Thanksgiving is the beginning of the end. The end of the year that is. As we all know, before the turkey is fully digested, the Christmas rush begins. I’m not even going to talk about all the Christmas that is being pushed on us before Thanksgiving. In the business world, it has always seemed to me that half the people basically shut down after Thanksgiving and the other half are going full blast squeezing out whatever else might be left in the year. I have found myself on both sides of that scenario. And, it can lead to major frustration, and then when we throw in all of the shopping, traffic, cooking, and partying, it can lead to a major melt down.

I think that this is the reason why people approach Thanksgiving like: “Is it Really Thanksgiving Already?”? It’s because they realize that the craziness for the next five to six weeks begins with Thanksgiving. While we are finishing the last of the apple pie on Thanksgiving afternoon, we are tightening our track shoes. 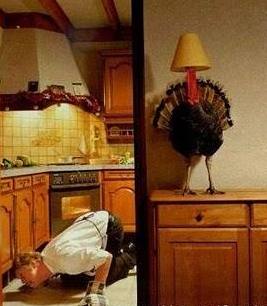 Because our perceptions are our realities, this year, I’m changing my perception. This year instead of saying, “Is it Thanksgiving already? I’m saying hallelujah! Thanksgiving has finally arrived,” and I am going to embrace and find joy in all of the mayhem that ensues!

I can’t believe Thanksgiving is less than 24 hours away, it just doesn’t seem to want to come this year! (See what I did there? ) And…and although mayhem may ensue, I am going and to enjoy the remainder of what’s left to of 2019, and remember to be thankful for all that I have been given!

I hope you will join me and change your perceptions to a happier scenario as well!!!

Every morning starting on Thanksgiving Day – if you don’t already – as soon as you wake up remind yourself of something you are thankful for. Write it down, this will help. you do it. If you forget first thing then make sure you do sometime during the day, but try to do it first thing. Then do it last thing at night.